Since the dawn of time, the number 7 has had a special place in most civilizations. As a magical number, the number 7 fascinates and intrigues. Why? What does the number 7 mean? Let’s discover here the symbolism of this sacred number.


Every day, we come across the number seven. We even sometimes don't realize it but it is part of our everyday life: the 7 days of the week or the 7 colors of the rainbow.

This number is also a particularly strong symbol. In many cultures, it is considered beneficial and protective. Its mystical aspect opened the door to many beliefs and superstitions. Often considered a sacred number, the number 7 bears within it something spiritual, eternal.


The study of numbers is a pretty complex field. We've already had the opportunity to broach the subject in an article dedicated to it, in which the meaning of the number 7 appears. In numerology, this number is a sacred one that refers to wisdom.


In the universe of the stars, the number 7 has a preponderant place too. Indeed, it corresponds to the number of planets and to the metals that are commonly linked to them, namely:


This mystical number can be found in many sacred books such as the Bible, the Torah or the Kabbalah. Here are a few examples:

That is why the number seven is also associated with divine perfection.


As far back as Ancient Egypt, many – notably religious – edifices were built respecting the proportions linked to the following numbers:

In parallel, this number brings to mind the 7 Wonders of the World, among which are found:

This number is part of our imaginary world, notably due to its magical side. Several tales refer to the famous number 7, like Snow White and the Seven Dwarfs, or the Seven-League Boots in Tom Thumb.

The Superstition of the number 7

Some consider it a lucky-charm number, one they play at the lottery as a lucky number. By the way, don’t we talk about “Seventh Heaven” when we experience great joy and satisfaction?

The number Seven can also be found in many magical rituals due to its beneficial charge.


If you see it in a dream or a vision, this is the sign of success, even of triumph. You can consider that your free will is operating and that it is time for you to forge ahead, and “ascend” to perfection through knowledge and wisdom.

Indeed, the number 7 represents spiritual maturity acquired after a learning cycle. It is also the constructive and continuous development of your personality. Therefore, on the spiritual level, it is as beneficial as the number five. 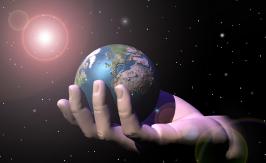 Nostradamus is certainly one of the most famous psychic readers and prophets of all time. His fascinating life and his amazing prophecies called Centuries have kept on surprising subsequent…

Exploring the Meaning of a Purple Aura

If you’re new to the concept of auras and are struggling to wrap your head around the aura colors and what they mean then this article is perfect for you. We’re going to explore the purple aura…